According to Alec, the event enjoyed ideal weather, which  was in stark contrast to what we had when we last attended an event here.  If you remember it was absolutely freezing then. It was a shame that there were not more of our cars attending the event, but those who did go were rewarded with a good day out and they all had a good time. The 3 Panthers and Peter's "red flash", as Alec refers to it, were parked 50 yards from a band that entertained them with good music throughout the day.  The Herne Bay event, in a similar manner to the event in Faversham, is held throughout the closed streets of the town. It is a good format for you are amongst the shops and restaurants and consequently can find plenty to interest you other than cars.

Alec was good enough to take some photographs for us and I've reproduced them below. Thank you Alec. 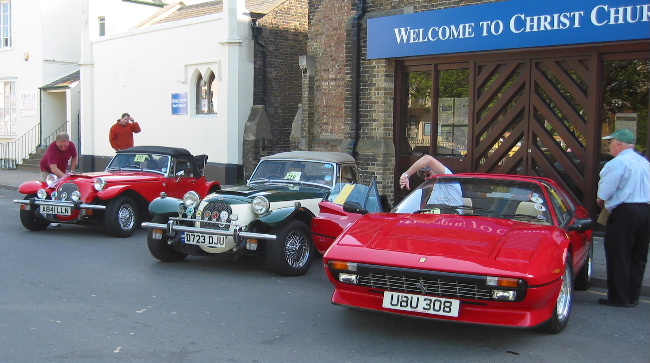 Give Peter a hand Dave, he seems to be having problems getting out of the Ferrari! or perhaps pop in the establishment next to you and offer up a prayer that he hasn't dislocated his arm. 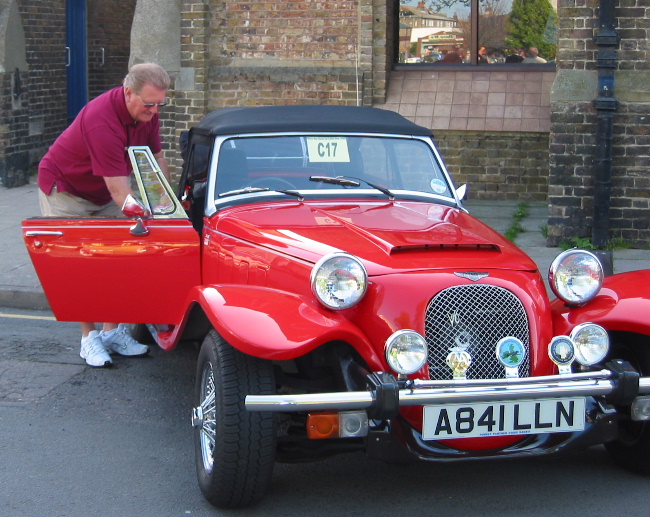 Compare this photo of Cliff and Yvonne's Kallista and Peter's Ferrari above -- who's car is the brightest red. My money's on the Kallista. Gleaming as usual Cliff - don't worry about that back axle whine - they all do that! 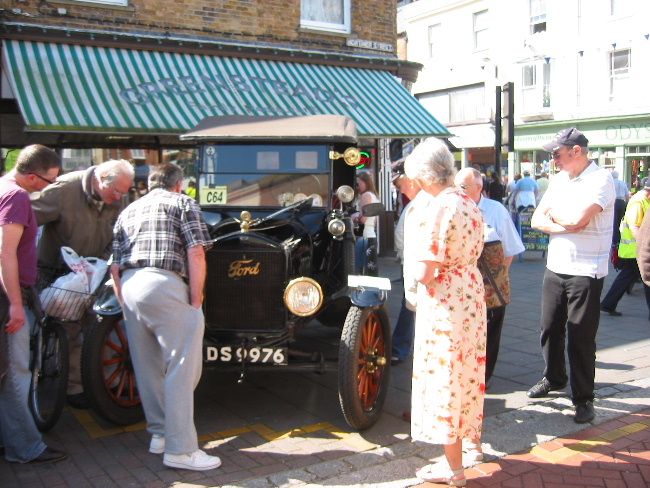 I bet the owner of this model "T" doesn't live far away unless of course he set out on Friday. Still nice to see such a variety of vehicles at these shows. I just don't think I could bear the monotony of chugging along on the inside lane. Can these be driven on the motorway? i.e. can they reach 40 mph? 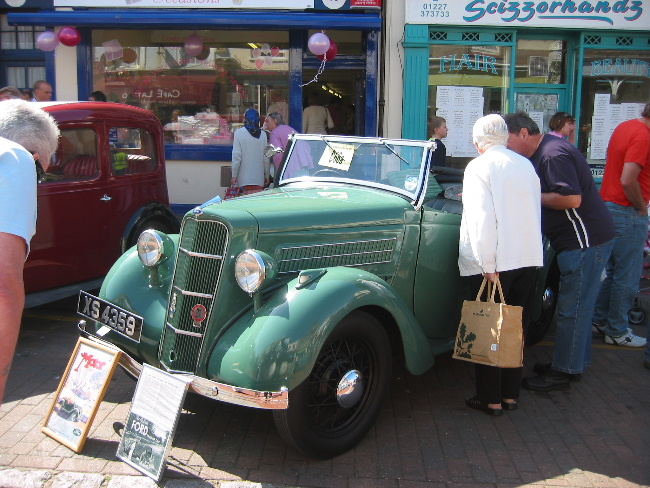 A nice little Ford convertible, admired by many, but the 2 women in the background are far more interested in what's in the shop window. They are probably cursing all these cars getting in the way of their Saturday morning shop. 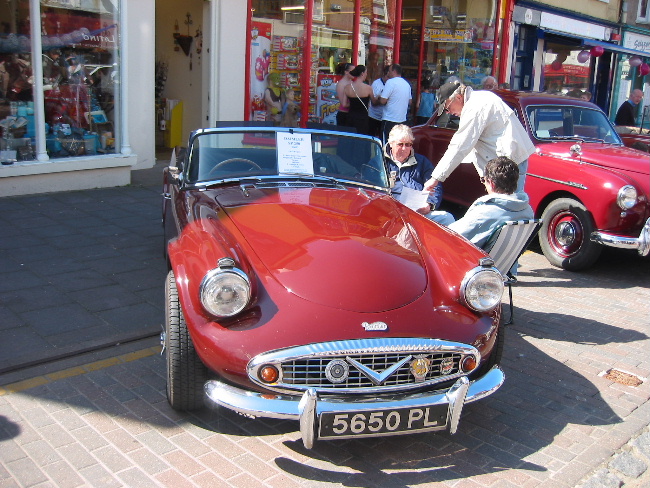 A very nice Daimler Dart, worth a great deal of money these days, but I can remember when the motoring press slated these cars with their fibreglass bodies. They had a great engine though and were fast enough to be used by the police in order to catch the baddies in their Ford V8 Pilots. 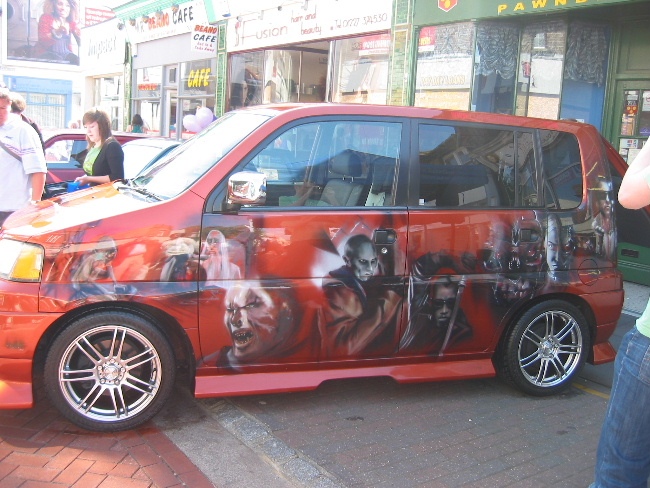 I don't know what the car is, but correct me if I'm wrong, I would imagine that the paint job cost more than the car!  Perhaps it cost too much and that's why it is at the pawn brokers. 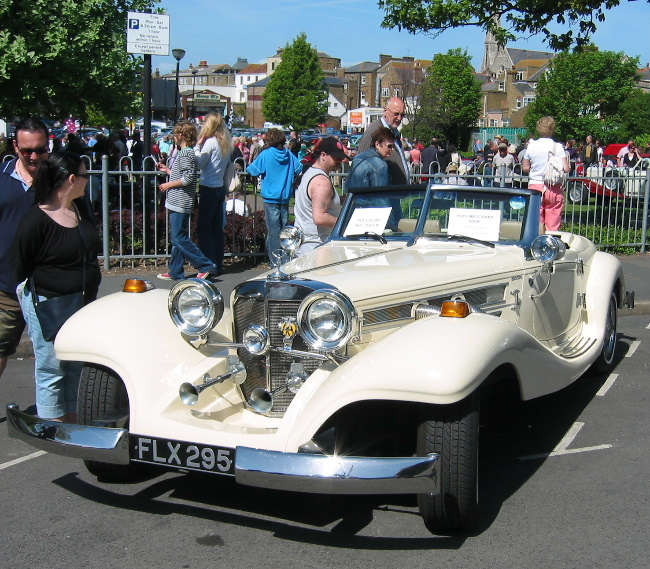 Blue skies, tee shirts and plenty of people, that's what we like to see. This car is, I believe a quite expensive replica (not a kit car) of the 1930's Mercedes 520K . I believe quite a few have been made. The last time I saw one was at the Panther meeting in Vianden in Luxembourg. 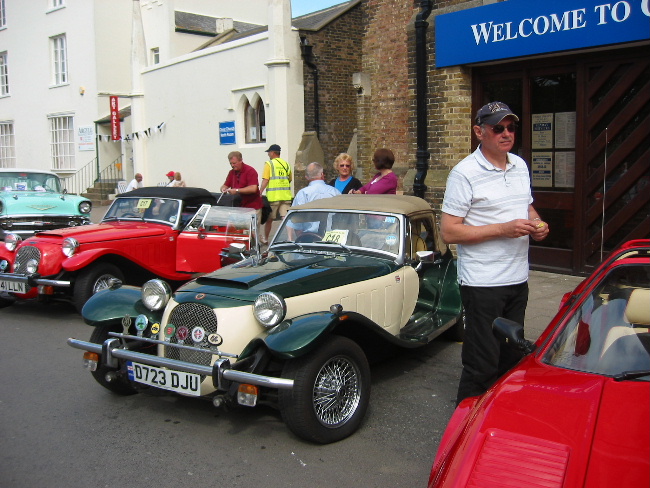 It's the end of the day and Peter, Dave, Cliff and Yvonne and Alec and Mary prepare to pack up and head for home.

Yes the Kallista red is definitely brighter. Get a respray Peter. Glad to see you are looking after my wheels Cliff.