For the second year running this event enjoyed absolutely fabulous weather, so it was just as well that the organisers had limited entry to the main show ground to pre-booked tickets. Those of you who went last year will recall that the whole area was grid locked because so many people took advantage of the good weather to attend on the spur of the moment.  We had pre-paid for 10 tickets, but really needed more. My requests for more tickets just prior to the event were refused and met with laughter. Jen and I set up the gazebo and marked out our "stand" on Saturday and it was clear then that space would be tight, but I didn't realise how tight until all the clubs arrived on Sunday. By parking our Ferrari mascot in the walk way, we just about had enough room to park our 9 Panthers in a line. This show is now huge. Knebworth which is traditionally one of the biggest shows was nowhere as big as this and Battlesbridge also had far more Autojumble. As to the quality of the Autojumble, I think it depends upon whether or not you found what you were looking for. A few of our group purchased "finds". The show was good. Not only was the quantity and quality of the cars good, but the food stalls, bar tents and music seemed better than before. I was told that so much space was used by the classic cars that they had run out of space for public parking!

Mindful of last year most of our group arrived early and it wasn't long before that wonderful smell of bacon cooking in the open air was wafting out of our gazebo. Bacon rolls, sausage rolls, tea and coffee are always welcome when you have had an early start as some of our group did, travelling up from Surrey and Hampshire.  Our Panther "pose" was made up of 3 Limas, (Mick & Sandie Bailey, Colin Pratt and Tony Appleby and son), 6 Kallistas (Mark & Collette Kingswell, Duncan & Julie Goudge, Les & Pearl Pratt, Chris Seear & Veronica, Alec Bradshaw and Roy & Jennifer Biddle) and of course the 1 Ferrari of Peter & Leigh Heales.

The day passed quickly. Many old friends dropped in to see us, including former Panther owners Derrick and Bryn Heath and there were quite a few enquiries from the public of the "where can I get one" type.

Malcolm and Liz Jones were unable show their car this year as they did not get back from a weekend in the Cotswolds in time, but that didn't stop them inviting us all back to their house for an "after the event" barbeque. This is the second year running that they have done this. They really are great hosts. Nothing is too much trouble and it is really a great way to round of the day. Little Monica and the animals are added entertainment.

Photographs of the day follow, many of which, as usual, have been emailed to me by Alec. Thanks once again Alec.

It is not very often that we are able to take the banner left to us by George as you need a Deville to transport it. However, we usually manage to get it to Battlesbridge. The transporting home this year was solved by Alec putting it in his passenger seat and taking it to Malcolm & Liz's. The passenger seat was vacant because Mary had a rotten cold. Hope you're better soon Mary.

We'd like to be able to show the banner more often because the public is usually ignorant of the Panther range and the pictures shown often prompt questions AND help educate them into believing they are not KIT CARS. 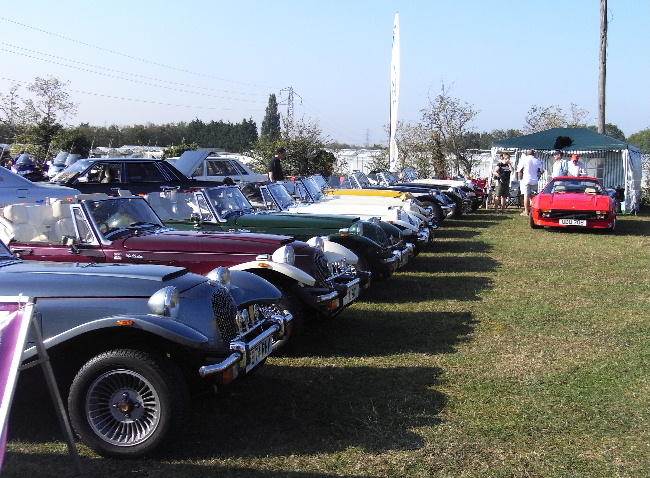 Our "pose" of Panthers with the Ferrari  parked in what should be the walk way. We were in the position that we like i.e. against the hedge at the end of the walk way, which gives us room to erect the gazebo and have reasonable sitting space.

A view you don't often see, the backs. George would not have approved of our parking, you have never seen such a crooked line of cars. It made me think, once again of Colin Wigham and his impersonation of the peg leg, ex-service man in his brown overall and war medals as he limped up and down making sure the cars parked in the right place and were in a perfect line. 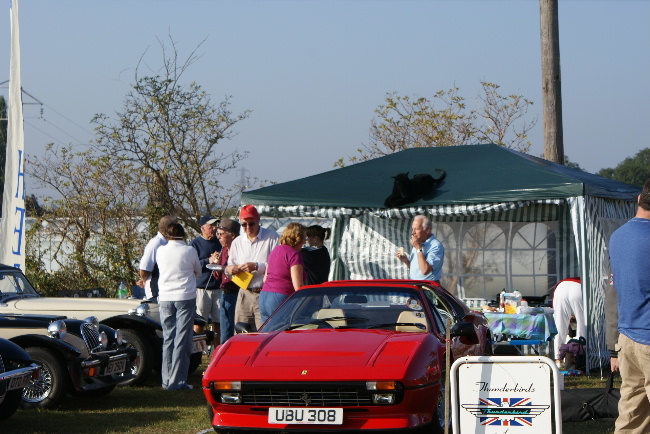 Bacon and/or sausage butties  going down well.  Must get the priorities right! 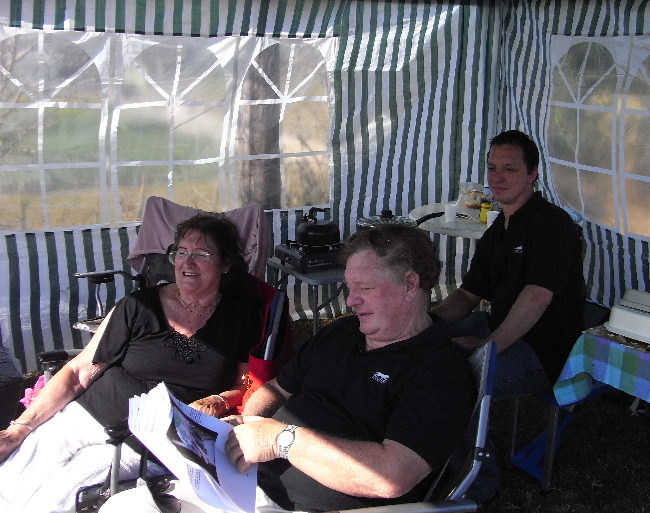 The Pratt family, Pearl, Les and son Colin looking at a print out of the Belgian Trip web pages and sheltering from the sun in the gazebo. This was Colin's first long trip in his MK1 Lima, since he restored it to running order. 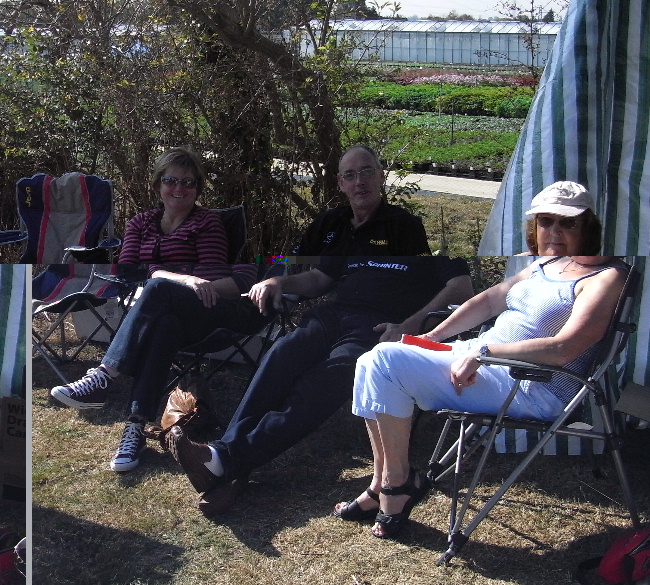 Julie and Duncan Goudge and Jennifer. This is Duncan's 2nd event with us the first being the RSPCA day and the first for his wife Julie.  We hope to see more of them next season. 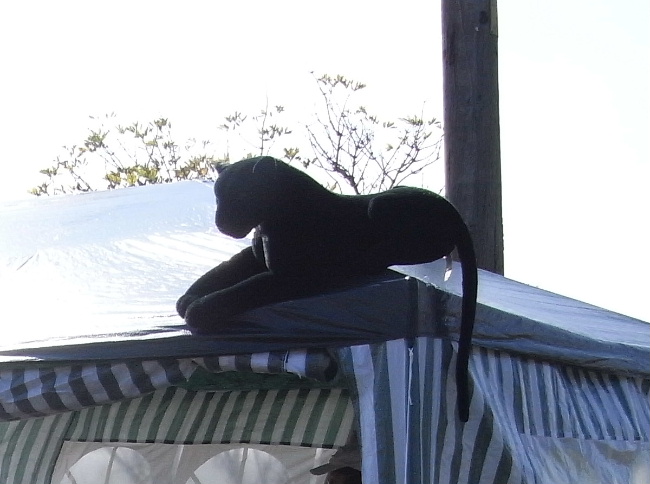 It seems as though the Panther is going to be a permanent fixture on the top of the gazebo.

Old friends and former Panther owners Derrick and Bryn Heath drop in for a chat and a cuppa. 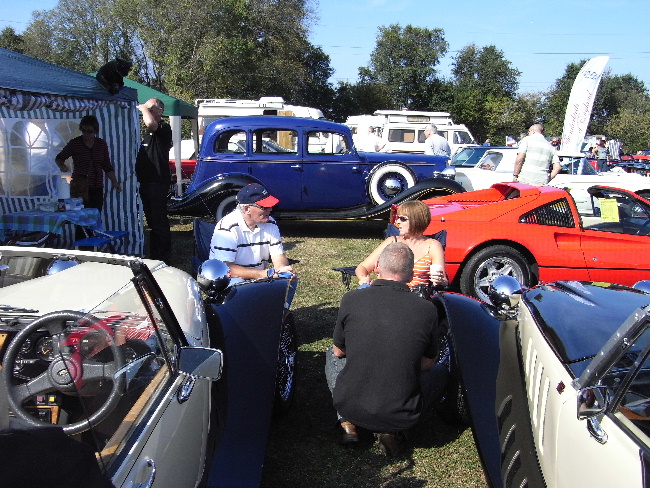 Tony Appleby chats to friends who are also visiting the show. Tony has a lot of work to do here. His friends are looking to buy a Triumph TR6. Come on Tony show them the error of their ways. Put them on the right path.

The car in the foreground belongs to Chris Seear, seen sitting in the gazebo in the cowboy hat. Like my car it has "knock on" chrome wire wheels, but unlike my wheels which require tubes, his are the later ones which are tubeless. The wheels are 15 inch and to keep the rolling radius similar to the original 13 inch, low profile tubeless tyres are fitted. The problem I have is that tubes are not recommended to be fitted in tubeless tyres. Chaffing and punctures can occur. Fortunately I have only experienced one puncture. However, to be prepared, I do now always carry 2 spare inner tubes with me.

Les and Tony discussing Les's son Colin's restored MK1 Lima. When this car was first seen it looked terrible having spent many years under a split tarpaulin in someone's front garden. Miraculously only a little welding was required and all the components, engine, gearbox, steering brakes and radiator were serviceable. Only the wheels now show that the car was neglected in the past. 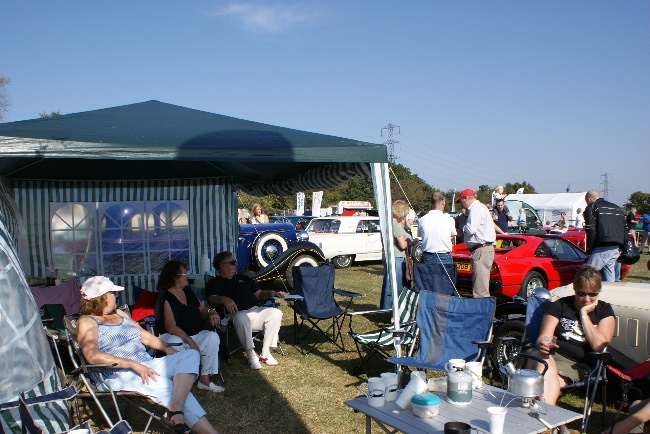 Peter talks Ferrari with his public 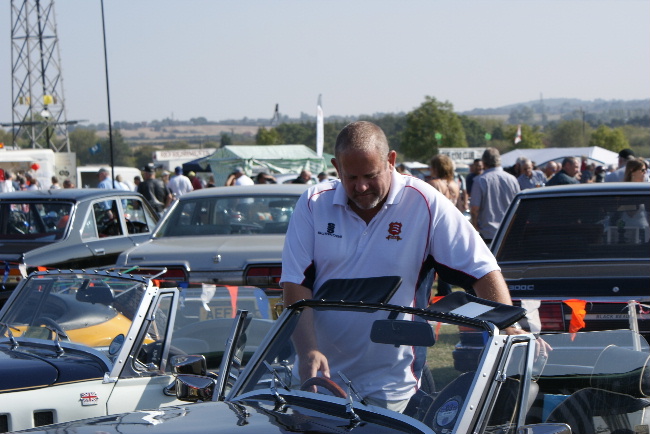 Mark trys a MK2 Lima for size. He managed to get in and out, but I wouldn't advise him to try a MK1. 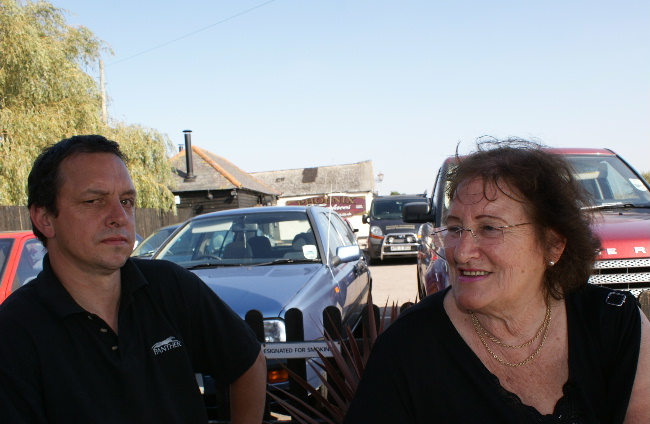 We can see the family likeness Pearl. Colin and Mum. 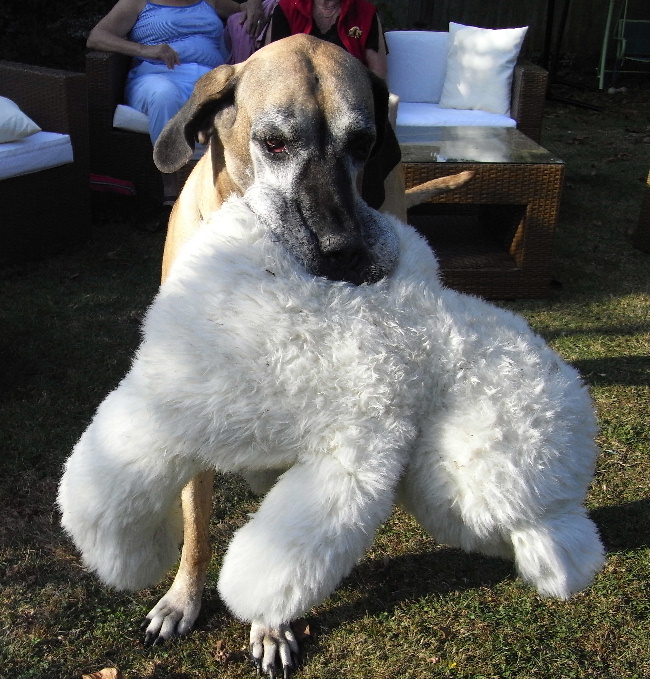 After the show  10 of us went back to Malcolm and Liz's for the BBQ, to be greeted by Lala their huge Great Dane with cuddly toy in her mouth. She's a big soppy ha'path, but apparently her character changes once on guard duty. 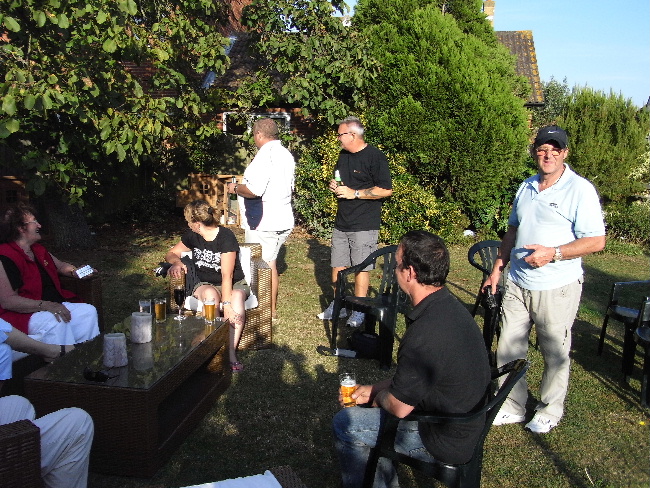 Success, she has 3 of these cute little birds and they seem completely unperturbed at being picked up and held. 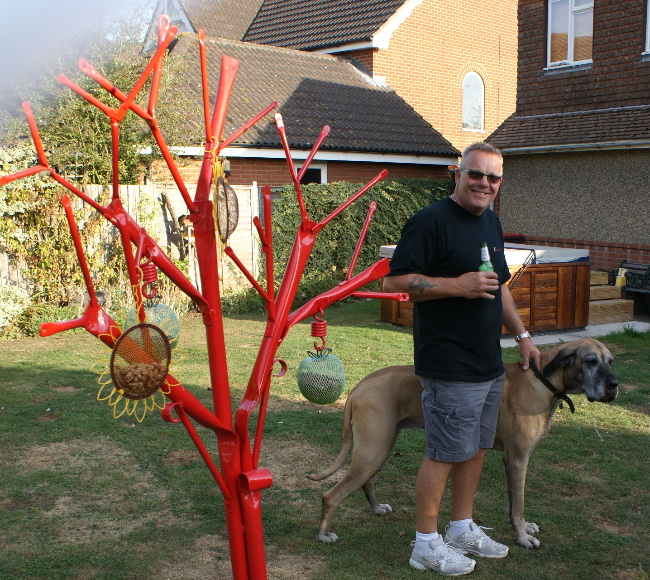 This contraption is a bird feeder. Whoever thought this one up obviously doesn't really like birds. I can only think that Malcolm made it. If it was painted brown or green it might, just might look more like a tree! 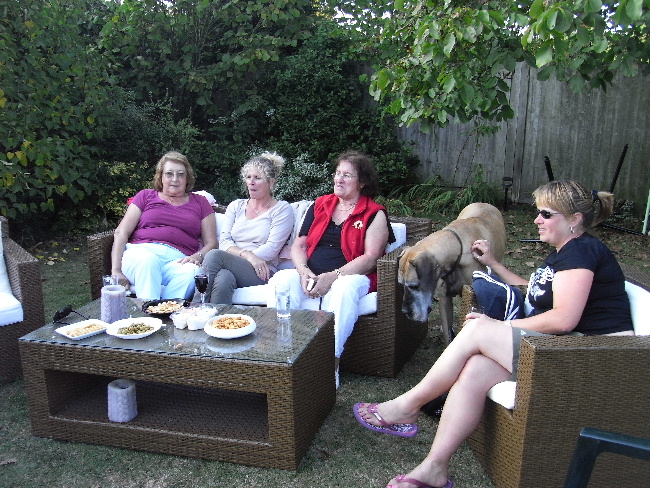 tend the barbeque in the traditional manner.

Below.....Its dusk and Liz finally manages to sit down with her guests and have a natter 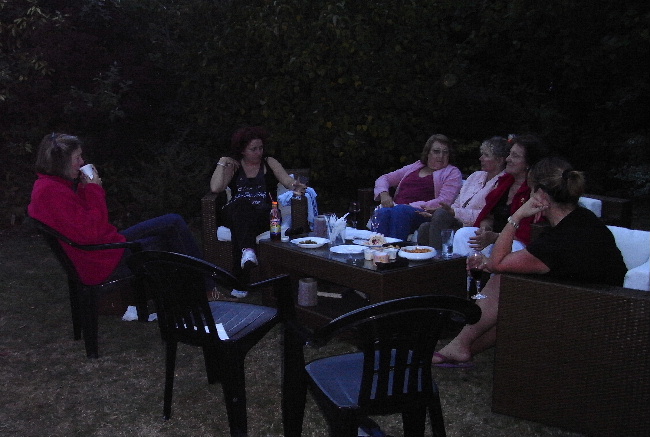 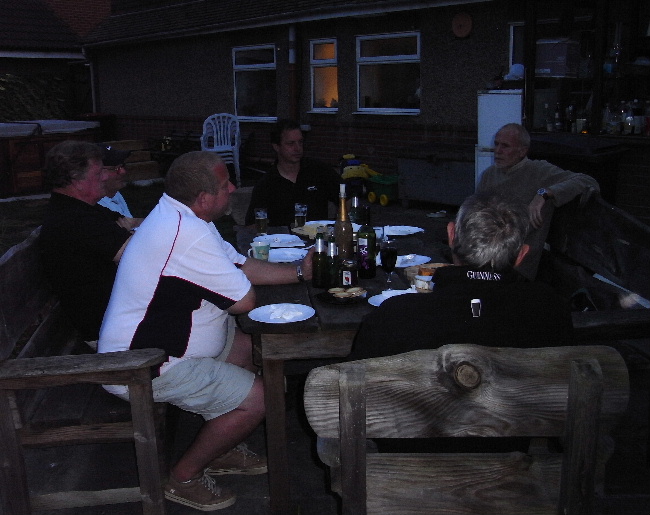 If we are going to sit out in the dark will everyone follow Mark's lead and wear white please.

Thanks to you all for coming to this the last event in our seasons calendar. It was an appropriate ending to what has been a good season and to Malcolm and Liz we once again say thank you for your hospitality.

A few selected photographs of other cars at the show follow. 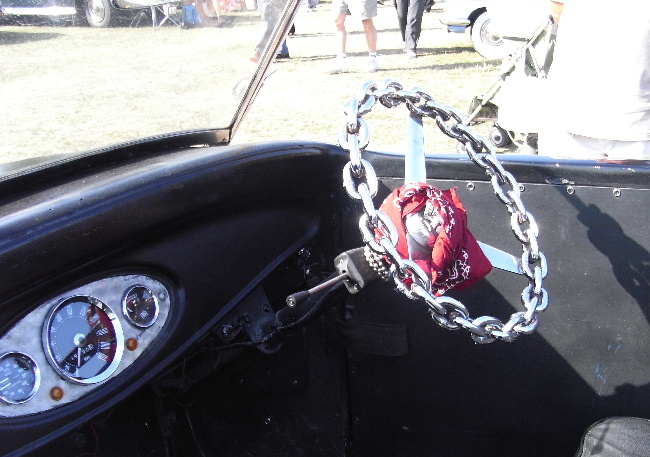 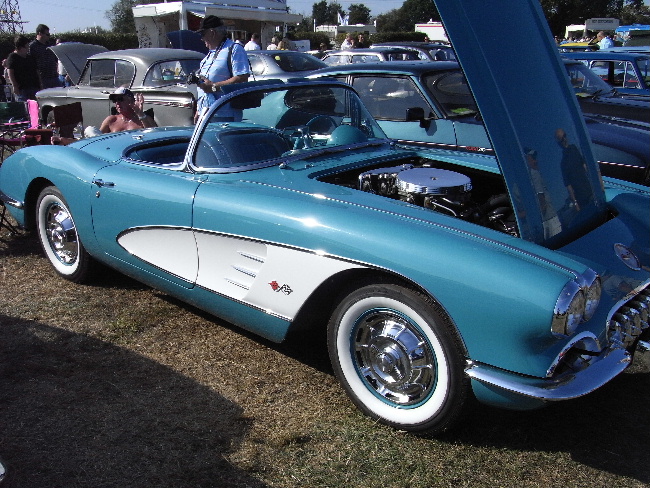 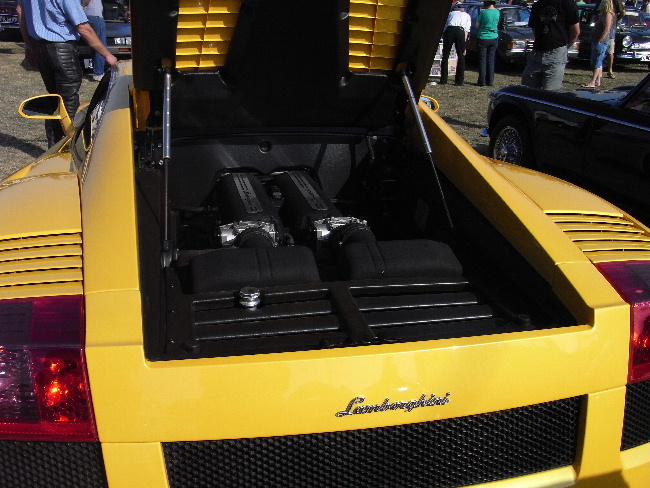 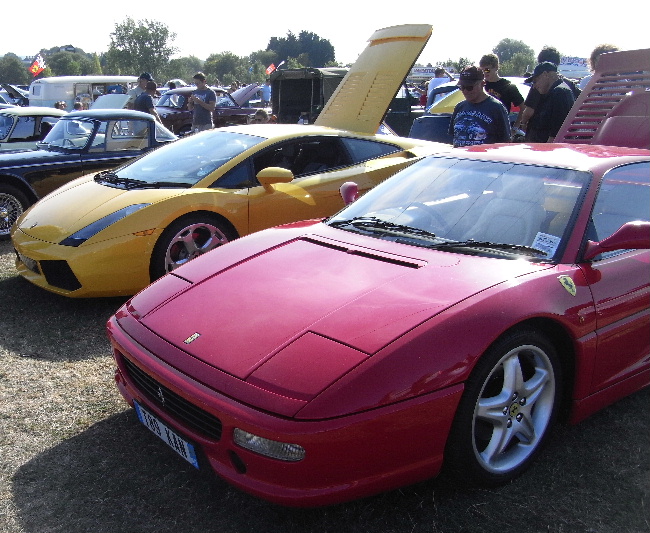 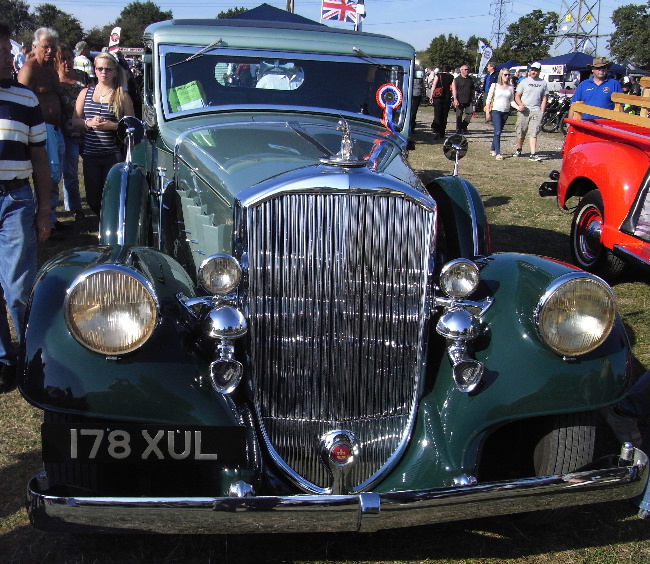 The steering wheel in the hot rod was I think typical of the imagination some of the people who build these cars have. The Corvette to me is the king of all cruising cars. You don't drive it fast you just pose as you burble by. Then two different approaches to engine compartments Lambourghini and Ferrari. What these 2 cars are doing at a classic car show I don't know, but in fairness they were not in the main classic field but in the 2nd field below the Autojumble. The last picture is of a worthy winner of an award and I've forgotten its name - anyone remember -email me at roy.biddle@btinternet.com