Return to Albums   Return to Events

This year the Battlesbridge show was bigger than ever - much bigger! So big that it caused major problems on the local roads. If you didn't arrive early, it probably took you anything up to one and a half hours to get in and as John and Pam Edwards discovered the police eventually became involved and directed cars to another field that had to be opened up for classic car entrants. The weather was absolutely glorious and this probably contributed to the chaos as many did not have tickets and were paying on the day. It was a good event, but they will have to come up with a revised entry method for next year.

We had a good turnout of 11 cars and could  have done with a little more space. We were not in our usual spot, but had a good site against the hedge on the other side of the field, which was useful as we were able to discreetly park the hatchback behind the gazebo. Some of the bikers found this useful as well - they used it to store their leathers and helmets! John and Linda, that couple of many forms of transport, had a very social day, as their friends in the Gold Wing club were parked next to us.

The music was good (well I enjoyed it) and although some of the queues at some of the food and beer tents were long, you didn't have to wait long to be served. Our "field kitchen" was set up in the gazebo and as is the tradition our 2 little stoves provided either a fried bacon or hot sausage roll together with coffee or tea as people arrived. Bacon rolls seemed to be the favourite, consequently, I'll be eating sausages for the next 2 weeks! The autojumble was extensive and with the large number of people present, the stall holders probably went home happy.

The day passed extremely quickly and in no time at all, it was "all hands on deck" dismantling the gazebo, banners, tables etc and bundling it all back into the hatchback. Some of us had accepted Malcolm and Liz's invitation to go back to their place for a BBQ, whilst others were going straight home (they obviously hadn't heard about Malcolm's speciality of rotisseried meat - pork this time) . To these we bade farewell and drove the short distance to Rettenden. Malcolm, Liz and helpers did us proud once again and when we left I swear the ground clearance of my Panther was far less than when we arrived.

Photographs of the day follow, not all mine, and I thank you for emailing them through. 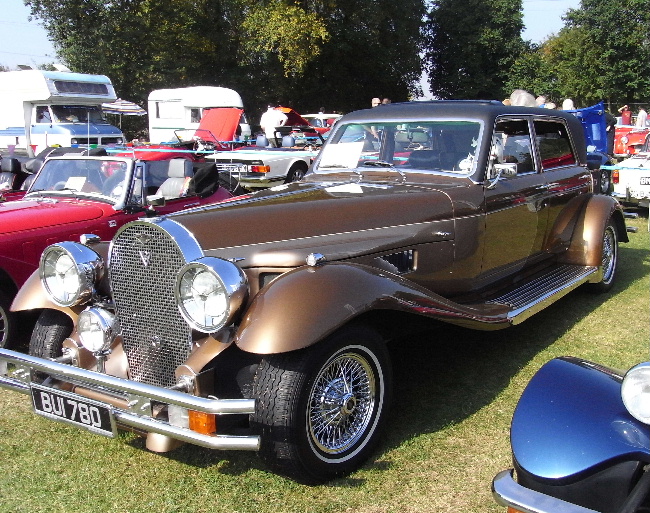 Those with cars on display were John & Linda Deed, Terry Hockley-Moore, Dave Turner, Les & Pearl Pratt, Alec & Mary Bradshaw, Mark & Collette Kingswell, Cliff Benton and Elaine Wigham (Yvonne working), Steve and Sharon Johnson, John & Pam Edwards, Malcolm Jones and Jennifer and yours truly Roy Biddle. Thank you all for coming and making it such an enjoyable day. Special thanks go to Les for helping me set everything up on Saturday and Malcolm and Liz for their hospitality at the end of the day.